On September 6, 2011, in Statements & Commentaries

MCA HQ, 6 Sept – Well known among Chinese education circles and seen to struggle for Chinese education in Malaysia, the late Lim Lian Geok (1901-1985), former Chairman of the United Chinese School Teachers’ Association Of Malaysia (popularly known as Jiao Zong), was an educationist as well as a social activist. His struggle for mother-tongue education saw his Malaysian citizenship and teaching licence revoked in 1961 due to his objection against the 1960 Rahman Talib Report which intended to abolish Chinese schools and the 1961 Education Act which required all secondary schools to teach in English or Malay. 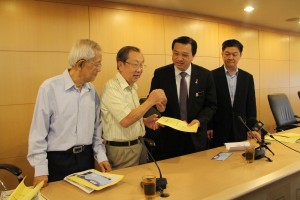 This morning, about 15 representatives from the Justice for Lim Lian Geok Movement Committee led by its chairman Dato’ Dr Toh Kim Woon and his deputy Low Sik Thong held a dialogue session with MCA Deputy President Dato’ Sri Liow Tiong Lai as well as MCA Central Committee member Dato’ Lee Chee Long seeking MCA’s mediation to reinstate the Malaysian citizenship of the late Lim. They handed over an MoU from the Lim Lian Geok Foundation for this matter.

Speaking to reporters at a press conference, Tiong Lai thanked the Lim Lian Geok Foundation representatives for the MoU and for a cordial and fruitful discussion.

“We received an MoU from the Lim Lian Geok Foundation to revive the citizenship of the late Lim Lian Geok,” informed Tiong Lai adding that “we will refer the MoU to the next MCA Presidential Council for detailed discussion and deliberation.” 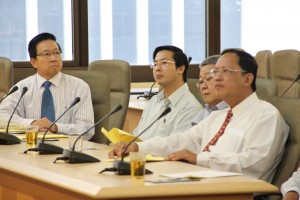 The representatives present at this morning’s dialogue advocating for the reinstatement of the late Lim’s citizenship are also members of the various Chinese guilds and associations in Malaysia.