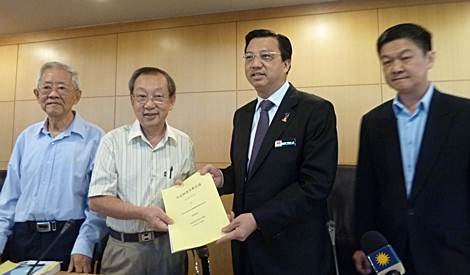 A campaign to restore the citizenship of revered Chinese educationist Lim Lian Geok today appealed for help with the MCA, to commemorate the 50th anniversary since Lim was stripped of his citizenship.

Representatives from the coalition of 13 organisations spearheading the campaign made the pleaded with MCA to fulfil the task during a meeting at the latter’s headquarters in Kuala Lumpur.

They were received by MCA deputy president Liow Tiong Lai, who is also the health minister.

Liow refused to make a clear stand on the matter, adding that it would be left to the party’s presidential council to decide whether this would be brought up with the Cabinet.

“This is a historical problem. MCA is looking positively into handling it. I was told that it happened on August 21, 1961. I was not born yet. I am still young,” he said in jest.

The campaign not only seeks to restore Lim’s citizenship posthumously, it also seeks the establishment of an Education Equality Act.

Lim was well known for his activism work during the early post-independent Malaya era, where he campaigned for fair and equal treatment of all languages within the education system.

He was strongly opposed to the government’s move to switch the medium of instructions of Chinese secondary schools to English. This led to his revocation of citizenship.

Meanwhile, Toh said that his delegation was satisfied with the meeting today, describing it as fruitful.

“(Going through) MCA just one of our channels, we also (cooperate) with other political parties and civil society organisation. I hoped that everyone can work hand in glove to achieve the two objectives,” he said.

He said that the party leadership should seriously consider this issue, including raising it with Cabinet level, and amend the law if necessary.