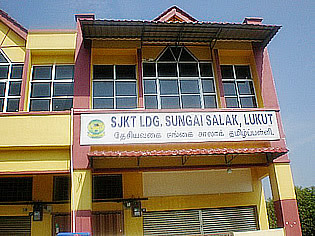 We are appalled that the 6-acre school land allocated to SRJK(T) Sungai Salak, Lukut during Bagan Pinang by election was forced to share with district education department. The election promise was made in Oct 2009, but as soon as the by election was over, the Education Ministry sent a letter informing the Parent-Teacher Association that the education department would have to use 3 acre piece of land out of that.

This is clearly breach of trust, all election promise must be implemented. We can’t help but deem that it was a trick to fish vote during the by election. The PTA claimed that they had spoken to Prime Minister Datuk Seri Najib Tun Razak’s aide and soon they received the land. We urge the PM to give an explanation on this.

The SJK(T) Sungai Salak located at the Ladang Sungai Salak was closed in 2002 when the plantation company ended its operations. As the Government failed to provide any alternative location, the school was forced to seek refuge in the premises of a near by Tamil school, SJK(T) Springhill from 2002 until 2007.

In 2007, due to space constraint  the school faced its second eviction. Afraid of a permanent closure of the school,   the determined PIBG was able to obtain a consent from the Ministry of Education to use a shop lot in Lukut town  pending land allocation by the State Government. The school was assisted by Tamil Foundation to raise funds for the renovation costs of the shop lot. The PIBG raised funds to support rental and other costs involved with the ordinary operations.

After the election, the PIBG was informed that the 6 acres was indeed to be taken away from the previous allotment of 6 acres for another Tamil school, SJK(T) Kem Askar Melayu.

It is pity that SJK(T) Kem Askar Melayu lost its allotted land of 6 acres and SJK(T) Sungai Salak which was promised the said 6 acres was short changed with only 3 acres. There is no sufficient explanation as to why the Tamil schools that carter for mainly the poor children of the Indian community are dealt in this manner. Indeed, both schools deserve government lands, this is not a two choose one option.

We consider it as the most irresponsible way of running education where mother tongue schools have been facing discrimination since independence even though they are part of the national educational system. The government’s refusal to provide full-aid causes miserable infrastructure condition in mother tongue schools whereby students are compelled to study in a non-conducive environment. Apparently, it deprives the children of their rights to equal education resource.

The government must be fair in allocating of education resource in terms of building of school, provision of infrastructural support and qualified teachers, as well as balanced financial allocation to both national and national-type schools.

Whether the school is on government or on private land, the categorization of ‘fully-aided’ and ‘partly-aided’ is unconstitutional and discriminative. The PM should abolish such a practice if he is truly upholding the spirit of ‘1Malaysia’ and ‘people first’. The 1Malaysia slogan will remains as rhetoric if the mother tongue schools continue to be discriminated and be treated as stepchildren by the Education Ministry.

With that principle, we also urge the government to speed up the process of building Chinese schools to fulfill the promise made before 2008 general election, including the SRJK(C) Tun Tan Siew Sin. We regret that even though the residents of Putra Heights had submitted a strong petition of 1200 signatures to education ministry in Jan 2009 but it just fell on deaf ears.