Three decades have passed and we are heartened by the fact that the spirit of the late Mr Lim Lian Geok – his insistence upon mother-tongue education – has finally bloomed and attained currency. Concomitant with the general opening up of society, Chinese Education has prospered and is developing well despite hardships and challenges.

Looking back we must realize that all our achievements are ‘hard –fought’ and do not simply fall from the heaven. In the past 30 years or so many of our forerunners and comrades had come forward to contribute one way or another towards the goals of Chinese Education.

We are also cognizant of the fact that it is with the overwhelming and unwavering support from the masses and the grass-roots that the LLG Cultural Development Centre could stand string and resolute during the stormy years.

The development of LLG Cultural Development Centre also bears witness to the political upheavals of Malaysian politics. The political domination of the ruling government has been eroded somewhat. Though the opposition parties have attempted to overthrow the government of the day, they could so far only wrest control of some states.

The dynamics of Malaysian politics is interplay of religious, cultural and racial imperatives. One observes, sadly, that the high hopes of opposition coalition seem to be dashed by differences in religious and political interests.  In addition, even though the voices of dissent in society have been quite loud and remained so, forces of conservatism from religious and racial parties are making a counter-attack.

On the economic front, as the leadership in the present government is suspected of being involved in some scandals, the livelihood of the ordinary man in the street is now adversely affected. 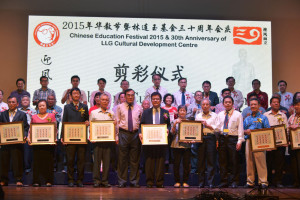 We have come to the cross-roads of the times – to opt for democracy or autocracy: are we moving forward or are we retreating or regressing? What we shall become will be the result of our capacity to apply our wisdom and our strength in implementing our avowed principles.

And even though the present political situation is grave and worrying, we take comfort in the fact that – at least for the time being – Chinese Education has eluded the greatest threats wherein Dong Zong remains a registered, legitimate organization.

However, we must not become complacent even though a major battle appears to have been won. A lot of work remains to be done: many of the proposed changes and reforms are awaiting implementation by the new leadership in Dong Zong.

We must also be aware of the ever changing market conditions in the educational field. We have to find ways to address the challenges posed by the mushrooming of private and International schools, globalization and the increased emphasis on the use of English language.

In fact the Chinese Education Movement is presently confronted with a grim situation – to continue fighting persistently against a declining monolingual education policy on the one hand, and to compete intensely in a rising, diversified education arena on the other.

It is opportune that we at LLG Cultural Development Centre do some ‘soul-searching’ and find out how best we should act in the light of the above-mentioned challenges and changing trends.

Though it’s true that the LLG Cultural Development Centre began as a steering body on ideas and concepts’, tasked with finding out new ways of thinking and methodologies in building a platform of multiculturalism, we need to ask ourselves what are our ways out or solutions in the troubling times.

We are going to make use of our experiences to actively carrying mental constructs, expanding our organization and strengthening the voices and forces of the people. We need to do these – in order that we shall remain strong and indefeasible.

Now the LLG Memorial has been open for more than a year and I believe it has depicted manifestly the history of the struggles of Mr Lim Lian Geok as well as that of Chinese Education in Malaysia.

The opening of the exhibition is a highly significant event in that it contributes to the growth of Malaysian culture and it is the task of the future generation to build upon our foundation to further strengthen the Memorial.

Having undergone 30 years of existence it is pertinent that we reflect and look back at history while at the same time set our mind upon the future. We must bear in mind the grand vision of Mr Lim Lian Geok in propounding the idea of ‘co-existence of ethnicities and co-prosperity of cultures’.

It is our fervent hope that Malaysia will in future be a prosperous nation in which all languages and cultures shall bloom and prosper, and that our dream of equality and freedom shall come true.

On these remarks I shall conclude my speech, hoping that those of us who are gathered here today will continue to stand firm and make contributions towards Chinese Education and harmonious racial co-existence.

Thank you very much!