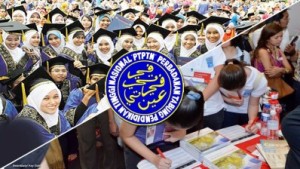 (The public forum “Higher Education Reform – Abolishing PTPTN?” was jointly organized by Cultural-Education Committee of KL & Selangor Chinese Assembly Hall and LLG Cultural Development Centre) Nicholas Wong 12:49PM Apr 26, 2012 Graduates are not hounded to repay loans as the National Higher Education Fund (PTPTN) works out of a sense of social responsibility, and not as a business entity, said its chief executive Agos Cholan.  There are problems surrounding debt collection, but PTPTN has other mechanisms in place for ensuring repayment, he clarified at a PTPTN discussion forum last night. However, they choose not to employ these “other mechanisms”, preferring the “friendly” approach to help students meet their debts, as its PTPTN’s social responsibility, not about turning in profits, Agos  said.  “Kita bukan ah long. Kita professional,” (We are not loan sharks. We are professionals),” he cracked to laughter from the audience at the Kuala Lumpur and Selangor Chinese Assembly Hall (KLSCAH).   He was clearly referring to the KLSCAH youth group’s charge that the PTPTN loan scheme is akin to a loan shark enslaving students.  He also outlined how they were looking to the National Education Savings Scheme (SSPN) as a long-term complement to the PTPTN, to help reduce students’ reliance on loans. This is to encourage parents to save money for their children’s education, so that they will be less burdened by debt upon graduating, he explained. Joking that he would obviously not want PTPTN to be abolished being as one of its employees, he pointed to the body’s goal of having at least 50 percent of students in the 17-23 age group in tertiary education by 2020 as a major part of its social responsibility. Financial black hole The forum titled ‘Higher Education Reform – Abolishing PTPTN?’ was attended by several other speakers including Malaysiakini’s Yong Kai Ping, independent columnist Fu Xiang Hong and international secretary of the Malaysian Youth and Students Democratic Movement, Heng Kiah Chun. Yong (left) described PTPTN as a “financial black hole” for getting large cash injections from the EPF but without being able to repay them. He cited a RM12.5 billion cash injection from the EPF between 2003 and 2006, comprising 78 percent of loans given out with only RM1.8 billion collected in return as of 2006. Agos replied by explaining that since the money owed PTPTN by students exceeded the amount owed to EPF, it was still viable. “PTPTN owes RM25 billion to EPF, and students owe PTPTN RM30 billion as such we are not a liability as far as the government is concerned,” he said. Yong proposed a new model where Petronas dividends are used to repay the debt, and with new public higher education institution (IPTA) and private higher education institution (IPTS) funds set up. Both funds should be disbursed based on a means test, Yong said, to ensure manageability as only people who truly needed aid will be eligible. Suggesting that corporate tax be reduced with the shortfall going to th mixed funds, he played up the issue of corporate social responsibility, saying companies should pool their resources into one fund rather than hand out individual loans or scholarships. As an incentive, these contributing companies should be allowed the first pick of graduates, to enhance their talent resources as well as providing employment. “When 45 percent of students are unable to repay their loans, the problem is not just with the students anymore. The problem is with the Malaysian economy as well,” added Yong. Fu (right) on the other hand, sought to distinguish between abolishing PTPTN and achieving higher education reform, calling them “two separate issues”. She pointed out many other problems with IPTA and IPTS, highlighting how these issues would not be resolved by simply providing free education for all. Instead, she emphasised issues like the lack of transparency in entry to universities, poor quality of teaching staff and the failure of universities to provide courses to meet market demands. She said the government needs to prioritise between higher education reform and other matters such as health care and transportation. However, Heng was adamant on a free tertiary education policy as he feels that it should be a right rather than a privilege as it is now, where only the wealthy have proper access to tertiary education. The government should invest more in human capital like South Korea does, rather than just infrastructure, he said. Agos, however, countered by saying that countries providing free education had a significantly higher income tax of 50 percent, compared to the maximum of only 20 percent in Malaysia. Source : Malaysiakini