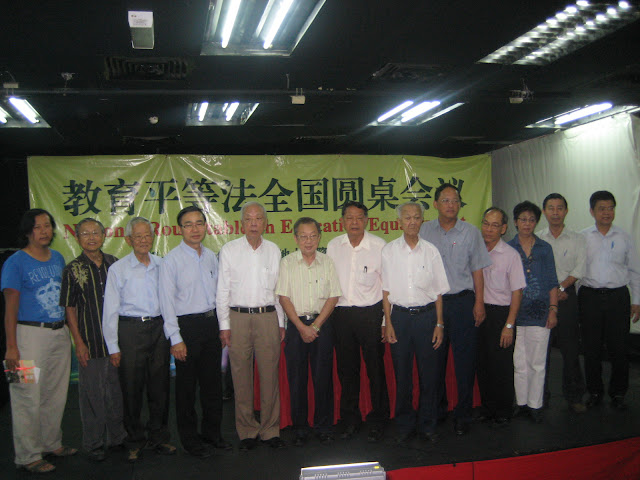 After 10 months of nationwide signature campaign, the Working Committee handed 63,848 postcards to the Prime Minister’s Department on the 5th March, 2012, urging Prime Minister Najib to implement the above-mentioned appeal.

Education Equality Act is a policy-oriented educational reform program. The 83 Chinese associations united behind the Justice for Lim Lian Geok Campaign believe that legislation is the only means to overcome the existing policy biases and systematic discriminatory measures. A new enactment ensuring equal treatment of schools of all streams by the government and fair distribution of educational resources to primary national and national-type schools is needed.

Besides, Justice for Lim Lian Geok Campaign Working Committee regards campaign for mother tongue education as an advocacy for equal rights to language and culture, but also as a concrete expression of the pursuit for equality of education. Therefore it is necessary to be united with other discriminated educational groups, to further broaden social concerns, and to expand grassroots support, in order to join forces more effectively and fight for the rights of all marginalised communities. Consequently, the scope of the Education Equality Act encompasses a wide range of issues and dimensions faced by various groups, such as the indigenous peoples, socio-economic status, rural-urban disparity, gender and special needs groups.

Reiterating that to enjoy fair distribution of educational resources and equal educational opportunity are the basic human rights of all citizens;

Alarmed by the systematic biases in our national education system since Independence with regard to language, ethnicity, religion, gender, minorities and socio-economically marginalised groups in the country, leading to discrimination which deprived them of the basic human rights to enjoy equal educational opportunities, suppression of their ability to participate in and enjoy benefits and wealth afforded by a democratic society, and the weakening of their identity as citizens;

Affirming the spirit of the UNESCO Convention against Discrimination in Education passed in 1960;

We are opposed to all exclusionary educational behaviour, whether it is the suppression of the distinctive characters of minority or marginalised groups by the majority, or the suppression of the internal heterogeneity of the majority; the principle of freedom of association provides that any community has the right to carry out educational activities while respecting individual rights to the choice of education;