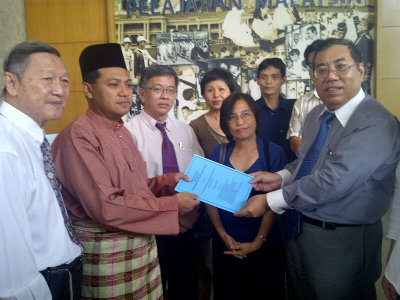 Phua Lee Kerk (far right) handing over the memorandum to a special officer from the Education Ministry.

PUTRAJAYA, Sept 7 — Chinese educationists want government to deal with high dropout rates among their secondary school students, mostly those who struggle with the remove class programme — which is intended to help with their transition from primary education in vernacular schools.

An umbrella grouping of Chinese educationists, Plan of Action for Malaysia (POAM), presented a memorandum this morning to the education ministry demanding the transition process to be improved.

They claim they are a working committee on drop-outs from secondary schools wanting to stem the dropout rates and therefore have presented recommendations to the ministry.

Students from Chinese and Tamil national type vernacular primary schools, usually attend remove classes in their first year of secondary education in national schools to help switch their instruction medium from their vernacular to Malay.

The goal is to help the students who have used Chinese and Tamil to learn their subjects prior, to have enough Malay proficiency to continue their study of subjects using Malay.

Phua Lee Kerk, who is chairman of the committee as well as the president of Japan Graduates’ Association Malaysia, told reporters that in 2002, the dropout rates from Chinese secondary schools were as high as 25 per cent. The figure was from a joint study between MCA and the Education Ministry.

“We notice that within the education system, remove class is one of the very key issues that is currently very seldom picked up by society because we always focus on the very bright students.

“But for the whole country to move forward, it is very important also we need to have a very strong layer of average students with good performance as well,” he said.

Students from national type schools who perform well in the Ujian Penilaian Sekolah Rendah (UPSR) primary school test are allowed to proceed to Form 1 without having to take the remove classes. These stronger students academically also face less difficulty in excelling in the secondary schools using Malay.

The committee pointed out that most of the teachers for remove classes are not proficient in the students’ mother tongue, thus creating communication problems. That the weaker students academically are not getting the right assistance to transition better.

In addition to that, the committee wrote in its memorandum that there was discrimination from society, students, and sometimes even teachers themselves stigmatise the students as being weaker students.

The committee also recommended that special training to be given to teachers for remove classes.

“The authorities and the society should cooperate to change the society’s stereotype on remove classes and give support to weaker students and encourage a new education system,” states the memorandum’s conclusion.

The committee members told reporters they were disappointed that despite making a prior appointment with the ministry to present and discuss the memorandum, they were only greeted by a special officer at the lobby of Education Ministry building to hand over the memorandum.